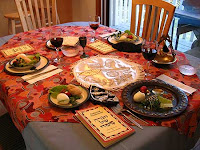 Tonight is the celebration of Passover. Passover is a major Jewish festival that celebrates the freedom attained by the Hebrew people following their exodus from Egypt where they had been slaves for either 430 years or 210 years, depending on the scholarly conclusions one follows. During the seder tonight children learn the importance of telling and re-telling the story of the Exodus from Egypt.

Here are some Passover books that we didn't list last year. Consider borrowing them from the library or purchasing them below to prepare children for Passover.

Sammy the Spider's mother teaches him to make a web when theirs is laid waste by a "monster"a broom being used to ready the Shapiros' home for Passover. Though Sammy becomes fascinated by his mother's explanations of the holiday traditions, he is repeatedly told, "Spiders don't celebrate Passover. Spiders spin webs." Following instructions, Sammy completes a new web?and participates in the Shapiro family observance after all. Using cut-paper artwork made festive with cheery patterns, Kahn depicts a contemporary human family (complete with kitty), and a mother-son spider duo reminiscent of Eric Carle's creations. Though Rouss's text is lively and informative, her attempts to blend Passover basics with a rudimentary lesson on shapes (the first page terms this "a book of shapes") become somewhat jumbled and ultimately water down both aspects of the story. Ages 3-7. Copyright 1995 Reed Business Information, Inc.
The Little Red Hen and the Passover Matzah
By Leslie Kimmelman
The Little Red Hen has gone through various versions and permutations, but surely this is the first time she has a Yiddish accent. Realizing it’s almost Passover, the Little Red Hen says, “Oy gevalt!” She needs matzah for her seder dinner, and that means growing wheat. Horse, Sheep, and Dog are not interested in helping. Harvesting? Again, nope. Milling? “We’re resting.” By now, the Little Red Hen realizes she’s dealing with a bunch of no-goodniks. She bakes the matzah (“according to Jewish law . . . in just eighteen minutes”) and then sets her seder table. Guess who arrives? “What chutzpah!” But then the Little Red Hen remembers the Haggadah’s words: “Let all who are hungry come and eat.” Children familiar with Passover will get a kick out of this, and the ink-and-watercolor art amusingly captures both the Little Red Hen’s aggravation and the animals’ turnaround. Those really in the know might wonder about a sheep at a holiday table where lamb’s blood plays a major role, but, hey, at least none of the guests are pigs. Preschool-Grade 1. -- By Ilene Cooper
Click here for a longer list of children's books about passover from last year. Happy Passover!
Posted by Best Nanny Newsletter at 7:00 AM