History in the Making for Domestic Workers! 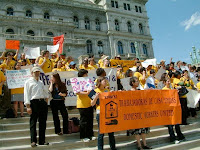 Domestic Worker's United asks domestic workers to join them at the historic signing of the Domestic Workers Bill of Rights into law at the new Harriet Tubman Memorial Plaza, a traffic triangle, at the intersection of Frederick Douglass Boulevard (formerly Eighth Avenue) at St. Nicholas Avenue and 122nd Street in New York, New York today at 11:00 am.

In San Francisco there will be a gathering at 12 noon at the Womens Building, 3643 18th St, to commemorate victory in New York and the passage of a domestic worker resolution in California. Si se puede!

This is great for all domestic workers. There were many complaints from domestics on this blog about illegals getting rights. I want to mention AGAIN only legals citizens will file complaints and they should have the law that allows them to. Illegals won't file claims because they don't want to be deported.

I am psyched that this law will help legal American citizens who work as domestics! Let's continue to focus on how this helps American citizens that are working as nannies and housekeepers in their own country.

This is the best time for this bill, during this difficult economy. I know plenty of white American nannies who are treated like modern day slaves. Yes they can leave the job when a slave couldn't but the tasks asked by parents for the nanny to do are humiliating and under paid. This can only help other low wage earners like home health aides and farm workers who still lack the right to a minimum wage and overtime pay.

More pressure on parents that are already strapped from tough economy already though.