Nanny Sharing in a Tough Economy 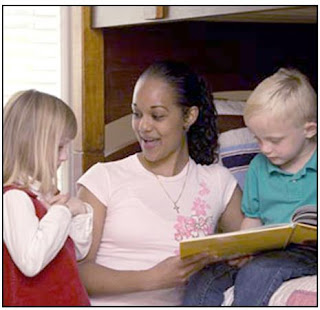 With the country in an economic recession there has been a lot of media coverage about nannies losing jobs and coming up with creative ways to keep their jobs. For example, some nannies have accepted less hours or less money to keep their jobs.

Other nannies agree to take on more household responsibilities like housekeeping, see http://bestnannynewsletter.blogspot.com/2009/03/feeling-pinch-from-la-times.html

Others agree to work for two families to keep working as nannies full-time. See http://bestnannynewsletter.blogspot.com/2009/03/cnn-about-nannies-and-recession.html about nanny sharing.

We spoke with Katelyn Montgomery, a 25-year-old nanny in Ridgewood, New Jersey who has experienced changes in her nanny job in the economic recession. Katelyn was solely working for an affluent family with one pre-school child and loved her nanny job. But the father (who wishes to remain anonymous) who had been working on Wall Street lost his job in November, 2008.

“At first the parents agreed they still needed me to work for them full-time so the father could search for a new job,” says Katelyn.

“But after the holidays and he still had not found a job the parents and I brainstormed about different ways to keep me employed, at a time when they needed to save money,” explains Katelyn.

The nanny continues, “I am very good friends with the mother next door to the family I work for and we see each other every day that I work.” She continues, "The neighbor has a child the same age we like a lot." Katelyn’s employers discussed the nanny helping the neighbor out a few hours a week as a way to reduce the cost of her full-time employers.

“The idea of sharing me as a nanny for the two families sounded great because I like both families and could still keep my job,” explains Katelyn.

So, in February, 2009 Katelyn started working in a “Nanny Share.” Nanny Sharing is when two families share the nannies services.

Although Katelyn is grateful she is working and the families are working together so she does not lose any income she admits, “It is hard working for two different families each week.”
“The first thing I had to do is raise my hourly rate because I am now taking care of two children every day instead of just one,” says Katelyn.

Other problems for Katelyn have been, “Now I have to wash two families worth of children’s laundry instead of one. Each family disciplines their children differently. Both parents have different rules about television watching. One of the families has a huge pet dog which I didn’t realize was going to be so difficult to manage,” says Katelyn.

She continues, “Adjusting to working in a new home environment with a new child has been really challenging.”

Katelyn says her biggest challenge so far working in a nanny share is, “When one child was sick they both get sick. But, the children have different pediatricians and they had to tag along to both doctor’s offices with me.”

“But, I am happy to be working and do like the parents and children,” says Katelyn.

“The two sets of parents should sit down and create a contract alongside the nanny together so that neither family is a more desirable job than the other,” explains the father.
He continues, “You don’t want parents working against the other.”

The father continues, “Parents have to be more flexible when sharing a nanny. They have to reduce their housekeeping expectations and understand the other family’s needs are important for the nanny too.”

"Benefits of Nanny Share include:
· Children are with friends and neighbors not strangers
· Much more affordable
· Minimum sickness
· No late fees when running a few minutes behind
· Bottles made and dinner table set
· Light housekeeping and laundry
· Professional, prompt, courteous service
· Professionally screened caregiver

The downsides of a Nanny Share include:
· Vacation scheduling for the nanny becomes complicated by the differing schedules of two families.
· Disagreements one family has with the nanny could overflow to the other family.
· Over time, families may develop differing philosophies about things such as appropriate television viewing, homework, housekeeping, playmates, and playgroups.
· Liability and homeowners insurance will not likely cover an accidental injury the other child suffers. The host family should consider this carefully and a discussion with a licensed insurance agent is recommended.
· If one family leaves the share. This can leave the remaining family in a financial bind as the nanny will expect her full income. This should be planned in advance when the relationship starts. Nanny Share families should have a minimum notice (four weeks is suggested) of intent to leave the share, or pay the nanny in lieu of the notice.
· Parents must consider who pays for food and supplies used in the home."

Katelyn’s employer who lost his job in 2008 sums up, “Rather than losing your great caregiver considering a Nanny Share with a family you already know and trust is a great way to keep your nanny.”

Do you work in a Nanny Share? What has your experience been?

Posted by Best Nanny Newsletter at 10:37 AM

My experience as a nanny share was bearable but not something I would choose to do again. It was not what I signed up to do. I wanted to work full-time for one family and had been doing that for a few years. Changing from full time to nanny share was not my idea. I basically had no other choice if I wanted to continue working for the family. I think the original family thought they were doing something nice for me. They rationalized that they were looking out for my best interests but really the mother just didn't like me I think and needed some space. Despite her rationalizations that she was helping me keep my salary I resented being told I have to share my time between two families. I decided to start looking for new jobs immediately.I worked the nanny share for many, many months though. I also gave a month notice but once the first mom hired someone new she just dropped me. No severance. I was screwed basically of three weeks work and although the nanny share second family would have kept me work for the final three weeks, the original mom didn't want that to happen. Having two moms as bosses just does not work.

I very much love the neighbors I started sharing time working with. But, the original mom should have kept me full time because she kept changing the hours and her demands remained the same while I was no longer working for her full time.

And all the issues mentioned by Katelyn in the above article are true but there were so many other issues too. Ironic that the original mother decided to do the nanny share since by working for the second family it just opened my eyes to the fact that the original full time job parents were not a good fit.

No one is bad in the situation. Everyone doing the best they could I think.

I think the nanny share might work better if you start the position like that from the beginning. Going from full time to part time for a family and spending the other hours at another family gets complicated.

I do not recommend it at all. But perhaps this is not the appropriate time to get picky. I think that nannies about to be laid off should consider any agreement to keep working. But keep looking because the nanny share is too complicated.

The positives about a nanny share is that I don't get annoyed or as bored with one family working for two families. I can do the same arts and craft projects for both families since I don't care for the children at the same time. I work for 1 family 3 days a week and another family 2 days a week. It helps the week go faster.

The nanny that commented right above me at 7:49 is a part time nanny with two jobs, she is not describing a nanny share job. I personally would not want a nanny share job, but I guess in a pinch I might do if temporarily if I needed to.
Meredith S.
Austin, TX

It is funny that Katelyn is saying she likes the nanny share business but at the same time lists more things she doesn't like about the nanny share. She's not selling the idea enthusiastically at all. I wouldn't either if I were in her position.
Jodi, Nanny, Boston

The whole point of hiring a nanny is to have personal, individualized care for the children. I think a nanny share situation does not encourage what makes having a nanny so special. If parents want to share the care with other children why not just send the kids to daycare?

I admire Katelyn for working with the families to creating a situation that works for everyone. It is hard to accept or listen to nannies that are not a little willing to work with parents under the circumstances Katelyn's employers are under. Hopefully the father won't be unemployed much longer and the work arrangement can go back to normal. He obviously did not drop the nanny right away. Sounds like a slow transition and everyone is trying to work together. Nannies should not say the would or could never work in a nanny share until they are in Katelyn's shoes. In these difficult economic times here in the East we might have to "settle" for less perfect jobs and just be happy we are working.
Brooklyn Nanny

I do not know anyone who has every done this nanny share and I have been a career nanny for almost 25 years. Frankly, nannies do not want to work for "cheap" parents. The only value to the parents is to save money so I do not know any nanny that would look for this type of job. Two sets of parents with more children just makes the whole job harder.
Steffi, Dallas

Although in these difficult economic times I cannot suggest that nannies shouldn't work as much as possible and save as much as possible, a NannyShare job sounds difficult. I would try everything in my power to find another way to make money as a nanny, if possible.
There are so, so many issues that could become problems. Being a nanny is very difficult because every parent is different.
Unlike in a school setting, nannies must really care for the children in the specific ways parents want their children taken care of. Two add an entire other family basically makes the job much less personal and much less quality, I think.
It would take a very strong nanny to manage four, rather than just one or two, parents.
Aixa in Houston

I am in a nanny share, started with families 'A' and 'B', unfortunately family 'A' had to move overseas, and thats how family 'C' came along. Needless to say I didnt sign up for the new family, I interviewed with them tho, and thought we were in the same page, but it has turned to be a nightmare to work with family 'C'. They have cut my pay, vacation and sick days.
My exp. with the original families had been great and I would say if you feel it could work, go for a trial period amd check for yourself.
S. (Boston)