Nannies, What's Your Advice for Weaning Children Off the Pacifier? 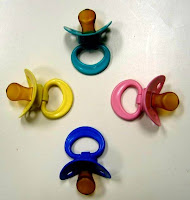 Pat Cascio, Owner of Morningside Nannies in Houston, Texas and The Association of Premier Nanny Agencies 2008 Agency of the Year award winner emailed Be the Best Nanny Newsletter stating, "I would love to hear what professional nannies have to say about giving up the pacifier by age two."

Well known pediatrician and author of 30 books, Dr. Bill Sears, discusses the use of pacifiers and how to wean tots from using pacifiers in his article, "Bye Bye Binky," on the Dr. Sears web site.

The pediatrician says, "Babies have an intense need to suck, and some have more intense needs than others. Babies even suck their thumbs in the womb. Next to holding and feeding, sucking is the most time-tested comforter."

Dr. Sears says, "Pacifiers are just that –- "peacemakers" –- which children return to as an attachment object. Some infants and young children have an intense need to suck for comfort, which lasts well into their preschool years. Seeing a plug in a three-year-old's mouth actually bothers adults more than children. This does not imply a psychological problem or a need unfulfilled by parents. On the contrary, the ability to use objects to self-comfort is a sign of psychological health."

He continues, "The only problem with pacifiers at three-years of age is the likelihood of exerting pressure on the upper front teeth, resulting in an overbite."

But, Dr. Brazleton also explains, "Very few people go to college sucking their thumbs or pacifiers. The children who keep on as late as kindergarten or the early grades are those in whom the habit was been reinforced by parents who interfered with it. If you want to set a stubborn pattern in a child, just try to interrupt it at a time when he needs solace."

If you are having trouble weaning a child off of a pacifier Dr. Sears recommends the following tips:

2. The trade technique. Here's a binky-breaking trick I have oftentimes advised in my pediatric practice. Take [the]child to the toystore and let her pick out a toy to "trade" for the pacifier. Experienced toystore clerks are used to this trading game. By making the pacifier less convenient to use, distracting her, and substituting a treasured toy, you should be able to close the pacifier chapter of normal childhood.

3. Lose it. Make his plug less convenient to find. When he starts to look for it, engage him in such a fun activity that he forgets his rubber friend. Then, arrange for the pacifier to be permanently "lost," meanwhile substituting other touches of comfort, such as lots of snuggling, and a few cuddly toys.

What successful tips can you share about weaning a child off the pacifier? What has worked for you?
Posted by Best Nanny Newsletter at 7:10 AM

The parents cut holes in the pacifiers and the child hated it.
Lauren, NY NY

It's key that it is removed by 18 months before a real emotional attachment is formed. I've seen parents collect the binkies to give them to babies.. I do think however, sometimes the child is ready to give up the binky and the parent is not. It's a quick plug to make a tantrum stop and it should not be used as such. We didn't use one for Abby. The AAP says to consider it for reduction of sids, but also says don't put it back in their mouth if it falls out at night, which seemed contraditory.
I think parents need to evaulaute why they are using the binky past the stage where children have the natural urge to suck.

I think this is up to the parents really. My experience has been I do as the parents wish. The three sets of parents I have worked with all cut holes in the pacifiers and called them "Broken". It works if you cut the pacifier and then let the child cry a night or two after doing it.

So often (job after job)the parents have told me: no more bottles at nap time, no more pacifier -- only to give the child a pacifier and bottle when they come home and at night.

I have read from experts previously that as nannies we shouldn't care what parents do at night while on the parent's watch. So, I don't give the bottles or the pacifiers but the parents don't always follow their own rules.

If they are consisted and "break" all the bottle nipples and pacifier nipples then that approach does work. But some tired parents will stop by the drug store the next day to buy a new pacifier so they can get a good night's sleep.

We did the broken binky too. Just cut holes in them and I would give them to her when she asked and if she complained I would say, "Oh, it's broken." We simply never replaced the broken ones.

Although comment above sounds discouraged it's easy to do and even eaasier to do if the parents are consistent with you.!

I've always started by making sure it's only used at certain times like nap/bedtime. As the child gets older and can comprehend, we go to the toystore and 'purchase' something with the pacifier.
Buffi

We cut the tip off with scissors but didn't let the boy see us do it of course. When boy brought it to me I just acted surprised and sympathetic to his loss. After the 2nd day he was completely over it. it was simple and painless!! We wish we had done it sooner.

Cutest thing is the mother told her little girl she would buy her something else to keep her comfort, completely honestly and truthful she asked her, "What would you like to replace the pacifier?" She picked out a really cool sleeping bag.

Her mom tucked her in and no crying. One night I was babysitting and went in to check on her. She was sucking on her baby brother's pacifier!!!

She had a stash under her pillow. I took it out of her mouth but left the others so not to wake her. I told the parents of course.

They said the next morning before breakfast the extra binkies were not under the pillow?

Eventually she confessed that she would wake up early and put them back in her baby brother's dresser drawer before coming down each day.

I don't know how we missed it. It was funny. But the mother decided to take away the sleeping bag until she promised not to use binkie. The mom checked nightly and no more binkies and no crying either.

I have used reward sticker charts. No punishments, just rewards. Have her pick out a special stuffed animal to hug and use instead for comfort instead of the pacifier. Nothing wrong with having a blankie like Linus from the Peanuts. Only problem with pacifiers is they give kids overbites. So stuffed animals or a blamkie work great.
Aupair Sophie

But I think it's harder when you have younger siblings with pacifiers and bottles because the older sibling will pick up the other sibling's pacifiers when caregivers aren't looking.

Use a reward system. You might want to incorporate a pacifier chart, and let the child build up stickers for the days he doesn't use his paci. Once he's accumulated so many stars, let him choose a new toy.

Not to sound harsh but, just throw the pacifiers out and let the kid cry it out for a night or two is all you need to do. If there are no pacifiers in the house, then obviously the kid won't use them!
Nanny Patti Nanny of Multiples
Harissburg PA

here's what my mom did to 5 children: she simply took scissors and snipped a very small slit into the tip of each paci ! sucking the air through the slit is uncomfortable und unsatisfying for the kid ! they lost interest within 2 or 3 days !