The Perfect Stranger by Lucy Kaylin 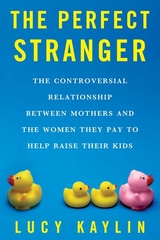 I have never read a book in which I had so many "Aha" moments as I did when reading The Perfect Stranger: The Truth About Mothers and Nannies

The author who is the Editor in Chief of O, the Oprah Magazine, was an executive editor for Marie Claire, was a senior writer for GQ and is the author of For the Love of God: The Faith and Future of the American Nun

expresses the thinking I always wanted to share but haven't been able to articulate.

The author captures in a detailed, humorous, and accurate way the essence of the relationship between a mother and a nanny -- the frustrations, the surprises, the intricacies of that daily dance. She clearly describes the power struggles and intimacy in their working and personal relationships.

Nannies are not hired by only the wealthy but the struggling middle class, mothers needing to work so they hire a woman she barely knows to love her kids and keep him safe, clean, happy, and moving comfortably along the moral path she and her husband have marked out for him. The author explains if the arrangement it entered in with care and respect, with eyes and ears open; it may be the best thing that ever happens to parents. But, it is never easy.

Virtually all moms are in agreement that sweet, loving, competent women tend to make the best nannies. However, parents move past those criteria and there's a whole host of loopy, seeming arbitrary considerations a new mother can't begin to anticipate until she is in the thick of the hiring process.

Stereotypes that might lead to lawsuits in other career fields do influence the hiring process of nannies. Parents may question hiring an overweight lady who needs to chase around kids all day, but also don't want to hire a slimmer nanny that is too pretty who might create competition between the mother and nanny for the father's attention. The author also describes the concern of hiring a woman of color not wanting to perpetuate really crazy prejudices and preconceptions when hiring Latina or Caribbean nannies to care for white children.

She also explains that mothers do imagine themselves being judged by the nanny and worries about the details that might reflect poorly on her. And I know personally, as does any nanny in a Facebook or social media nanny group, that nannies do judge the decisions their employers make in raising their kids.

The book not only enlightens nannies about the guilt that working mothers experience while hiring caregivers, but she gives nannies a voice in the pages as well. The author understands many nannies leave small children of their own in their home country in order to work in homes in the States to make money for those kids. She cannot fathom how difficult it is for some nannies to abandon their own children (physically) to care for other kids in the hope of a better life.

The author says if nannies want to keep their jobs they have to roll with the chaos of family life, with the strife and the unpredictability of a household that isn't theirs, where the customs may be abhorrent to them -- where they'll find themselves elbow-deep in dirty laundry and figurative kind that's not their own. She explains how difficult the long hours of navigating around pajama-clad bosses who personal problems are strewn about the house like the colorful plastic toys they gather up and put away a dozen times a day can be.

She also shares the father's chief role in the female drama unfolding each day in the middle of his home as a peacemaker and facilitator each day.

The book describes an unregulated business, where the labor is carried out in private homes that isolate employees and shield employers. The potential is infinite for unfair business practices, a lot of it admittedly unwitting. Parents themselves set the wages and ground rules based on hearsay. But, no one is policing the situation. It is up to the employer to compensate the nanny fairly. In turn, the nanny must have the fortitude to challenge her employer, in lieu of a human resources department, if she thinks she's being cheated, something exceedingly difficult if she's an illegal alien living in fear of being deported. Stores are rampant of power-mongering bosses who threaten their undocumented employees with reporting them.

Be it the joys of caring for kids, to the daily struggles of working in someone else's home, to the legalities of working in an undocumented career field nannies and parents will gain much insight into the world of working as a nanny and hiring a nanny. I highly recommend all nannies read this book to better understand how difficult it is for working parents to leave their children in the care of other women and men so they can earn a living.

Posted by Best Nanny Newsletter at 5:30 AM

Email ThisBlogThis!Share to TwitterShare to FacebookShare to Pinterest
Labels: Lucy Kaylin, The Perfect Stranger, weekly trip to the library