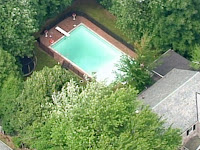 Here is a horrific story reminding nannies and au pairs to use caution this summer.

A 3-year-old Long Island girl and her nanny died tragically after they were found floating in the deep end of the family's swimming pool yesterday, police said.

Naama Markovits' 5-year-old brother made the horrific discovery about 2:30 p.m. and alerted a worker who was painting the family's Lawrence home.

"My sister and the nanny are floating in the pool!" the boy screamed frantically, cops said.

The painter, Jony Granados, made "a heroic effort" to pull the girl and nanny Lorena Canales-Mejia out of the pool, perform cardiopulmonary resuscitation on them and dial 911, said Nassau County Police Detective Lt. Kevin Smith.

Naama was later pronounced dead at a Queens hospital.

Canales-Mejia, 32, a native of El Salvador, was placed on life support, but she passed away several hours later, police said.

Smith said Canales-Mejia was watching the girl and her older brother while their mother was away from home, along with a third child.

Canales-Mejia may have slipped into the deep end of the in-ground pool and dropped the child, Smith said.

Click here to see the story in the NY Daily News.

If you are a nanny or au pair do you have basic water safety training or lifeguard training?
Posted by Best Nanny Newsletter at 10:39 AM

Yes I have been certified to be a lifegaurd and I'm the only nanny or au pair that I know that has that training.

I am a local childcare coordinator with Cultural Care Au Pair (culturalcare.com). We have a continuing education program that we do with au pairs quarterly. One of the topics we cover is water safety and drowning prevention. This is covered at the monthly au pair meetings that are held, and it is usually done in the summer months when there is an increased opportunity for swimming and water related activities.

I am certfied as well bc I have a Girls Scout Troop and you have to have that in order to take your girls on water related outings. As a Nanny when I go to the pool with my kids. I am swim with them and every 5 mins I do a head count and call out each of the kids name and I have to hear them "YES" and I make sure we take breaks every 25-30 mins and get out the pool (great freeze pop break) and I make it a rule that all my kids have to know how to swim PERIOD NO EXCEPTIONS to the rule period and I let the parents know that as well and we usually play in the shallow end anyways. I am real cautious around water and I dont let kids come over to play in the pool if they cant swim its just my rule.

This is a very sad situation...I am just a little curious why the Nanny was allowing the kids to play around water and she couldn't swim (not placing blame on her at all)

Many years ago while on the job I had to dive into a pool fully clothed to pull out a kid who was thrashing in the water. Fortunately I can swim.

I am also basic water safety certified after attending the Nanny Retreat last fall in Wisconsin (alas canceled this year in FL because of the oil spill).

After that nanny drown a few years ago it is really upsetting to me that some parents don't get it still and hire people who can't swim or won't get them water certification. Because even a swimmer could drown, they should know water safety and what precautions to take when around water with their charges.

And, this isn't just limited to pools. I go on trails over bodies of water all the time with charges and it's important to be prepared.

I don't think nannies should take jobs at houses with pools unless they are comfortable with swimming. I am not in great shape anymore but I certainly could save a 3 yr old from a pool. I can't imagine why a caregiver would work at a home with a pool if they don't know how to swim.

Not to mention that mothers ignore their kids at the pool all the time thinking the high school lifegaurds can protect their kids. While they certainly will help you it's your job (nanny, aupair, or mom or dad) to keep an eye on the kids!!

And, no matter their age you need to supervise all aged kids!

It will be interesting to see if the house had a fence around the pool, an alarm in the pool or other safety features. Toddlers just aren't scared of the pool area and older kids think they are more capable than they are and take risks. I wouldn't want to work for a family with a pool. I prefer going to pools with lifegaurds (despite Deb's warnings about lifegaurds not being perfect either).
Imani O

I could swim before I could walk, was a competitive swimmer by age 5, a competitive diver at age 8, and a junior lifeguard by age 10. Even though all three of my young charges can float (ages 3, 3, and 5) I absolutely will NOT take them swimming without other competent adult swimmers to help me out. Some drownings are not a matter of how long a child is submerged, but how much water they inhale in initially. One of my former teens is now a mom of three. Her oldest son drowned at age 2 1/2, two years ago, and was only under water for a few seconds...she was right there to grab him. But, when kids swallow enough water too fast their hearts stop. His did. And it never started again. He knew how to rise to the top and float, too, but it didn't help him that day.

with two mothers and we all stayed together so one person would watch the little ones that couldn't swim and two of us stayed with the three older ones in the pool. We also had a kiddie pool where we swam so we could sit in the pool with the kids, that was much better, since the three of us were the only ones there.
K.K.

If your caregiver or you (parent) are going to be near any body of water, not just pools be aware of the important steps to take. Teach these things to children. If you have a pool, why not do water rescue drills with your nanny and kids together.

Hey Steph,
Hey what happened to this link on facebook? You had the best responses on FB and now they are gone? Who deleted the comments and why?
Maria Lopez
Miami FL

Hey Maria:
The link and comments are in the NOTES on the FB page. Don't know why but that's just how FB works?

I would never hire a nanny that couldn't swim near any water: beach, pool, lake... As tragic and horrible as it is this could have been avoided.

I don't think we should be blaming the victims. I think the nanny was clearly a heroine who died trying to save a child's life.

I must say, I thought this was a pretty interesting read when it comes to this topic. Liked the material. . . piscine Accessoires et convert piscine en suisse