Ruth and the Green Book by Calvin A. Ramsey 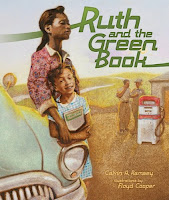 Weekly Trip to the Library for Nannies and Au Pairs

Since February is Black History Month we suggest borrowing children's books from the library on the topic.

Ruth and the Green Book
By Calvin A. Ramsey
Review by Elizabeth Kennedy, About.com Guide

The picture book Ruth and the Green Book

is an excellent work of historical fiction. The book is set in the 1950s. It's the story of an African-American family's car trip from their home in Chicago to Alabama to visit relatives, the racism they encounter and the help they receive. This help comes from other African Americans and from the Green Book. Told in the voice of Ruth, a child, and accompanied by evocative illustrations by Floyd Cooper, Calvin Alexander Ramsey's story provides a poignant look at the impact of the Jim Crow laws. An afterword tells the little-known history of The Negro Motorist Green Book.

Young Ruth is excited about going on a trip in her family's new car -- a 1952 Buick -- all the way from home in Chicago to Alabama to visit her grandmother. At first the trip is fun, but soon there are problems. It's the Jim Crow era in the South and African Americans like Ruth and her parents encounter racism and "whites only" signs on restrooms, service stations, restaurants and hotels. With no available restrooms, they have to use the woods and with no place to stay, they drive through the night.

In Tennessee, Ruth is happy when her daddy's friend, Eddy, welcomes them to his home. There they spend the night. The next morning, Ruth overhears Eddy warning her parents about Jim Crow and what they might encounter as they drive further south. When he sees Ruth is worried, Eddy reassures her and tells her to look out for Esso service stations because her family will be welcome there. After her father explains to Ruth that Jim Crow isn't a person but "a bunch of ugly laws forbidding blacks and whites from mixing in any way," Ruth reflects, "It hurt my feelings to be so unwelcome." When they come to an Esso station, the attendant tells Ruth and her parents about The Negro Motorist Green Book, which "lists places in lots of states where we would be welcome to sleep, eat, shop, get a haircut - and all kinds of other information besides."

Once her father pays 75 cents for a copy, the family immediately uses it to find a place to stay that night. Ruth is particularly impressed because the home's owner doesn't charge anything since she feels helping one another is the right thing to do. Ruth decides, "I'm going to do the same one day!"

There continue to be ups and downs on the trip, but Ruth's parents put her in charge of the Green Book, and with the Green Book and the helpful African Americans they meet on the way, the trip continues.

The night before arriving at her grandmother's, Ruth thinks about the bad and scary things that have happened -- "It made me sad that some people were mean to Negroes" -- but feels that on the positive side, "...it helped to know that good black people all over the country had pitched in to help each other."

Author Calvin Alexander Ramsey is a playwright whose plays, like his children's book Ruth and the Green Book, focus on what he refers to as "unknown pages in African American history." (Source: Carolrhoda Books) Ramsey is a recipient of the Martin Luther King, Jr. Drum Major for Justice Award.

According to award-winning illustrator Floyd Cooper, "My personal goal is to take the reader on a journey into the story, to get a sense of the smells, the atmosphere, and the emotions conveyed by the characters." (source: Houghton Mifflin)

Posted by Best Nanny Newsletter at 7:33 AM