A Millions Moms for Gun Control Vs NRA 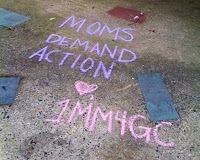 Do You Sway More in Support of A Million Moms for Gun Control or the NRA?

The Indianapolis-based advocacy group A Million Moms for Gun Control is attempting to leverage the collective power of mothers across the country through social media to demand action on gun control legislation.

Founder Shannon Watts established the group in the wake of the Newtown, CT shootings.

As part of the campaign, which supports new and strengthened gun control laws, as well as the Large Capacity Ammunition Feeding Device Act, mothers across the country write the slogan "Moms Demand Action" and sign it with a heart and 1MM4GC, the acronym for One Million Moms for Gun Control, on sidewalks in front of their homes, train stations, schools, and any place they can hang a sign.

But, at the same time the Huffington Post reports that the National Rifle Association (NRA) membership has surged by 100,000 since the Shady Hook Elementary School Shooting clearly showing plenty of people support the NRA.

Other media outlets report that the NRA is gearing up to face one of the strongest challenges to its cause in many years: recommendations from an Obama administration working group on gun violence that are expected to address assault weapons and high-capacity magazine clips. Although the NRA may not support much stronger gun control methods, supports of the NRA certainly don't want children shot either.

The topic is very controversial and I personally don't know all the answers. What do you think? Do you sway towards supporting One Million Moms for Gun Control or the NRA?
Posted by Best Nanny Newsletter at 5:30 AM