Have You Ever Cared for a Colicky Baby? 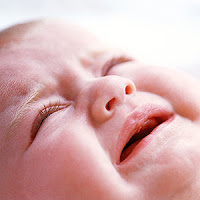 Is it Crying or Colic?

Almost all babies go through a fussy period. When crying lasts for longer than about three hours a day and is not caused by a medical problem (such as a hernia or infection), it is called colic.

About 20% of babies cry enough to meet the definition of colic. The timing varies, but colic usually affects babies beginning at about three-weeks of age and peaks somewhere between four- and six-weeks of age.

The child with colic tends to be unusually sensitive to stimulation. Some babies experience greater discomfort from intestinal gas. Some cry from hunger, others from overfeeding. Some breastfed babies are intolerant of foods in their mothers' diets. Some bottle-fed babies are can't tolerate the proteins in formula.

Colic will not last forever! After about six-weeks of age, it usually begins improving, slowly but surely, and is generally gone by four-months of age. When colic is still going strong at 12-weeks, it's important to consider another diagnosis (such as reflux).

Click Here for Reference
Tomorrow: More About Causes of Colic
Posted by Best Nanny Newsletter at 6:00 AM

Email ThisBlogThis!Share to TwitterShare to FacebookShare to Pinterest
Labels: Colic

It is such a had thing to get through! As a new mom you are already sleep deprived and terrified of doing something wrong, and this happens! I was nursing, so my diet definitely played a big part in this. I was basically living off of rice and water at the end when our pediatrician told my that it was in everyone's best interest to put him on formula. That did the trick!

Of course, if you are nursing, you'll probably want to try everything before you resort to switching to formula. A few things that seemed to provide a little relief from the discomfort were swaddling, holding him on his tummy in my arms, and bending his little knees up to his chest.

Yes I took care of a baby with colic for my very first nanny job. It was horrible. You feel so helpless. What seemed to work for me is applying light pressure to the baby's belly. I would just press my hand there while feeding and right afterwards. The mom changed her diet too since she was breastfeeding. Thank Goodness the mom was home for maternity leave and we supported one another. I just felt so helpless sometimes.

Never found anything harder than caring for a colicky baby.