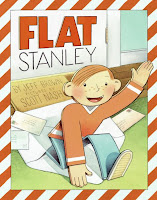 Book Reviews by Kids for Kids
Review by Taylor, Eight-Years-Old

Flat Stanley is about Stanley Lambchop. One day a bulletin board fell on Stanley and made him flat. At first he was upset, but then he learned that being flat could be fun. He did things no normal person could do. One day Mrs. Lambchop and Stanley were walking Mrs. Lambchop's ring fell in a hole. But Stanley went down into the hole and got the ring back. He no longer needed keys to open doors. He was sent through the mail. He even helped to solve a crime.

Arthur, who is Stanley's brother, is the best brother in the world. He tries to help Stanley when Stanley is sad. I thought it was great when Arthur put the books on himself so he could be flat like Stanley.

The illustrations in the book matched the story and helped, especially when Stanley did things that were hard to imagine, like being sent through the mail. In the back of the book is a colorful cut out of Stanley. I am going to mail him to some of my friends.

Stanley is my favorite character. He may be flat, but he is a hero to me. I think others should read this story because it is very interesting. There are a lot of adventures they will like.

Email ThisBlogThis!Share to TwitterShare to FacebookShare to Pinterest
Labels: Book reviews by kids for kids, weekly trip to the library