Why Nannies Should Never Yell at Children 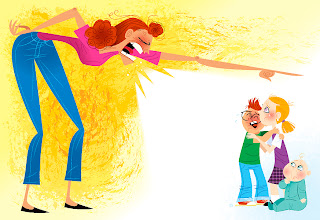 People Only Yell When They Have Lost Control

Nannies and au pairs are important role models for the children in their care. It's common sense that to teach good table manners caregivers must use good table manners, to show kids how to share childcare providers must share, and to teach kids to be kind the adults in their lives must be kind towards others.

I remember from my psychology courses in college and days as a counselor with kids that when adults yell at kids it's the adults that have the problem, not the children. People only yell when they feel they have lost control.

Yelling at a kids who are trying to annoy their caregivers gives the children the upper hand by getting a reaction out of adults. Instead, calmly telling kids what they have to say gives nannies the upper hand. Constantly reacting to behavior contributes to misbehavior for the sake of getting attention.

Let the consequences of their actions teach children. If there is a reward and punishment system in place let the rewards and punishments modify the children's behavior rather than yelling. For example, if children know they will earn a star on a star chart for making their bed and lose a star if they don't, nannies don't need to yell at the kids because they forgot to make their bed. Just give them the star they earned or take away the star they lost. If kids know they will lose a privilege if they yell at their siblings, then caregivers simply need to enforce the discipline instead of raising their voices at them.

And when adults feel like they are about to respond to children in anger, they ought to take a deep breathe and count to ten.

It is natural that kids will occasionally "get under our skin." But, yelling at kids for something that is affecting adults doesn't resolve the problem.
Posted by Best Nanny Newsletter at 6:00 AM